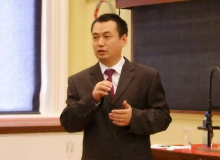 Jianzhang Zhao has been a full professor since 2005, in the School of Chemical Engineering, Dalian University of Technology. His main research interests are the photochemistry and photophysics of organic compounds, focused on the intersystem crossing (ISC) and triplet excited state-related properties. The research in the group is based on synthetic chemistry, steady state and time-resolved transient optical spectroscopy and time-resolved electron paramagnetic spectroscopy (TREPR), as well as theoretical computations. Electron transfer, energy transfer and electron spin dynamics (ESP) of organic compounds are the main subjects in the group.

Jianzhang Zhao earned his Bachelor’s degree in chemistry at Hebei University in 1993. He received Ph.D. degree in 2000 at Jilin University. Then he moved to Pohang University of Science and Technology (POSTECH) to do postdoctoral research under supervising of Prof. Kimoon Kim. He worked on supramolecular chemistry of cucurbituril (CB) and he prepared two new cucurbituril derivatives. In 2001, he moved to the Max-Planck Research Unit of Enzymology of Protein Folding at Halle (Saale), Germany. He worked on photochemistry of peptide (photo-switching of the conformation of peptide) with Prof. Gunter Fischer. In 2003, he moved to Department of Chemistry, University of Bath, to do another postdoctoral research. He worked on enantioselective fluorescent chemosensors, with Prof. Tony D. James at Bath. In 2005, Jianzhang Zhao joined Dalian University of Technology as a full professor.

His lab is well equipped with steady state and time-resolved spectrometers. He published more than 200 papers on peer-reviewed journals, with H-index of 52. Jianzhang Zhao has been listed as one of the highly cited Chinese researchers from 2015. He was elected as a committee member of the Photochemistry Association, the Chinese Chemical Society, in 2018. He has supervised 3 postdoctors, 13 Ph.D. students and 20 Master students.